Although Necrobiosis Lipoidica affects only one of every 300 people with diabetes, this disease of the legs can be very disfiguring.Women are three times as likely as men to encounter this problem.

Although Necrobiosis Lipoidica affects only one of every 300 people with diabetes, this disease of the legs can be very disfiguring. Women are three times as likely as men to encounter this problem. On the right, the large lesion in the lower shin in one of John's patients shows advanced changes. The thin, translucent-appearing skin reveals blood vessels and other subcutaneous tissues that are not normally visible. An early NL lesion can be seen near the bottom and another intermediate lesion is at the top.

Good blood sugar control likely prevents NL from occurring. Once it arrives, current treatments usually have only a modest impact.

Diabetic dermopathy refers to roundish, slightly-indented patches of skin that are brown or purplish in color. Most frequently seen on the shins, they usually occur in skin that has been injured or traumatized. Although it can occasionally be seen in people without diabetes, it almost always occurs in those who are older or who have had diabetes for at least a couple of decades.

Diabetic dermopathy appears to be linked to slow healing. John Walsh, P.A. has seen several cases of discoloration improve or disappear entirely following improved blood sugar control and low doses of zinc. Use of 15 mg. to 25 mg of chelated zinc a day for several weeks appears to help the lesions resolve over several months, especially when combined with near normal blood sugars.

Some example pictures from UC Davis Online Journal plus closeups and more pictures. 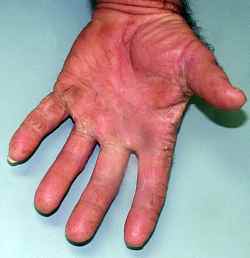 Both fungi and bacteria feed on high glucose levels, and the skin is a favorite site for fungi to flourish. Tinea pedis, which occurs between the toes and occasionally the fingers, is most often caused by trichophyton rubrum and trichophyton mentagrophytes. The widespread fungal infection with scaling and cracking in the left hand of the 50 year old man on the right is one example of a tricophyton infection that responded well to topical Loprox, a prescription antifungal cream.

Candida albicans is another commonly seen fungus and is the most likely to affect the groin and vaginal areas. Candida albicans and also cryptococcus neoformans can affect the skin, although these two plus aspergillus varieties are the most likely to create a systemic infection in those who have a weakened immune system. Three other fungi, blastomyces dermatitidis, coccidioidies immitis (largely seen in the southwest US), and histoplasma capsulatum (more common in the midwest US) can cause direct systemic infection.

One study in South Africa of 100 people with diabetes and another 100 without diabetes found that fungal infections were two and a half times as likely with diabetes, especially in people whose average blood sugar was above 160 mg/dl.

Fungal infection of the nails is referred to as onychomycosis (on-ee-koh-my-ko-sis). A good picture is available from Skin Site. Nail fungus can be treated with repeated applications of Penlac®, a liquid that is brushed onto the nail. Fungi do not like vinegar, and vinegar soaks of the toenails (15 to 20 minutes every other day) can help get rid of the infection. Be sure to thoroughly dry the feet and between the toes after all soaks, showers, etc.

Tinea pedis, or athlete's foot, can be treated with Mycotin® Spray between the toes, but the source of the fungus should also be addressed by sprinkling Tinactin® powder in all shoes and in socks before use. Thorough drying between the toes after a bath or shower, use of sandals in all public bath areas, and using wool or synthetic socks rather than cotton socks which stay wet, can all help reduce future infections.

Unfortunately, liver toxicity and liver failure can occur with these oral antifungal agents. They can also cause a widespread reaction of the skin and mucous membranes called Stevens-Johnson Syndrome. Other side effects include nausea, upset stomach, headache and tiredness. Check with your physician whether the benefits of these medications outweigh their potential risks. Liver tests may be needed before and during treatment.

Natural, over-the-counter treatments can be tried for some external fungal infections, but effectiveness and strength will vary in different products. Pau D'Arco is reported to be helpful for vaginal yeast infections. Manex manuka cream and gehwol cream may have some ability to reduce skin fungi and will also moisturize the skin at the same time. Other natural treatments, like tea tree oil or melaleuca alternifolia may have some effect, and Kolorox may be particularly helpful against candida