Dexcom’s latest continuous glucose monitor, the Dexcom G6, features advancements that make it more convenient than ever to track your blood sugar in real-time. Most insurance plans now cover the G6, and it’s available at many pharmacies rather than as durable medical equipment (DME), which can make it easier to get authorized. It’s becoming widespread. You have probably seen their ads on television. 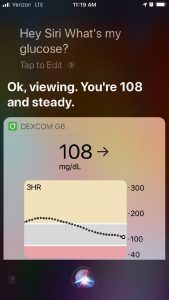 I used the Dexcom Seven in a clinical trial way back in 2007. iPhones had just come out. I would never have predicted that thirteen years later, I would be sitting across the room from my iPhone and say, “Hey Siri. What’s my glucose?” and it would answer me in an almost-human voice, “You’re one-hundred-eight and steady.”

But someone younger than me or newer to CGM technology may not appreciate how great it is, compared to both older Dexcoms and to other CGMs currently on the market. So…

What’s so great about the G6?

The G6 requires no calibrations, not even upon start-up, which means no fingersticks to test blood glucose. That’s none, zero, zilch! Ever! Of course, you should still own a glucometer, because if you ever feel your symptoms don’t match your CGM readings, you can double-check. And if the glucose readings are very different, the G6 does allow optional calibration. My fingers are finally healing after sixteen years of six or more pokes per day. Maybe I can learn to play guitar now. If only I had the talent and perseverance.

The sensor lasts 10 days before needing to be changed. That’s not as long as the Freestyle Libre at 14 days, but the Dexcom is more sophisticated. It’s also not as long as the Eversense at 90 days, but you don’t have to go to a doctor’s office to get it implanted under your skin as you do with Eversense. (see our Comparison of Current Continuous Glucose Monitors)

The G6 is only officially approved for wearing on your abdomen (or upper buttocks for patients ages 2-17), but many users wear it on the back of the arms with no problem. Some more adventurous users even wear it on the thighs or calves, which give you more real estate to work with if you’re on a pump, as it needs to be at least 3 inches away from an infusion site.

It says a lot about the G6’s accuracy that it’s FDA approved to make treatment decisions–such as insulin dosing–without a fingerstick to verify. That’s backed up by my anecdotal experience. Compared to my results with the Medtronic Guardian, the G6 is way more accurate.

It’s relatively easy to use. I say relatively because every CGM is a pretty complicated device. But everything about the G6 feels easy, from insertion with the preloaded one-time-use applicator, to start-up, to daily use. Even transferring data between the Dexcom G6 and Dexcom Clarity apps on your phone is automatic. No plugging in the receiver and waiting for data to upload.

The sensor graph is viewable on the dedicated receiver or a smart device. You can also view it on a smartwatch as long as the phone is nearby. The Dexcom G6 also integrates with the t:slim X2 insulin pump, in which case your info can be viewed on the pump screen.

You may be wondering which is better to use–the app or the receiver. One big reason to use the app? One less device to carry around. On the flip side, not everyone owns or even wants to own a smartphone, so a receiver is a necessary option. It’s also a good backup if your phone dies or you go somewhere that phones aren’t allowed, like work or school. You can use both at once.

Maddie Nielsen, an astute young YouTuber, breaks it down: 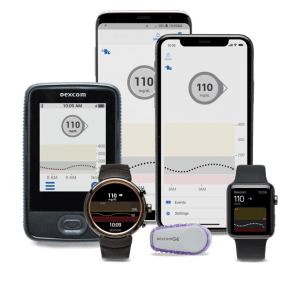 But let’s face it, most of us are glued to our smartphones, so it’s very convenient to have CGM data displayed there. With the Dexcom app on your phone, data transfers seamlessly to the Clarity app, without plugging the receiver into a computer and waiting for it to upload. Read more about Clarity below.

The Dexcom G6 app is available for most smartphones and watches (you can check compatibility here). You can also log events directly in the app, like units of insulin, grams of carbs, exercise minutes and intensity, and health events. And the great thing is, these events actually show up in your Clarity reports, so unlike some other tracking systems that don’t seem to transfer over, your log-keeping has a purpose. The Dexcom Share feature within the app allows you to share data with up to ten other people—family members, loved ones, or healthcare providers.

The components of the system are: 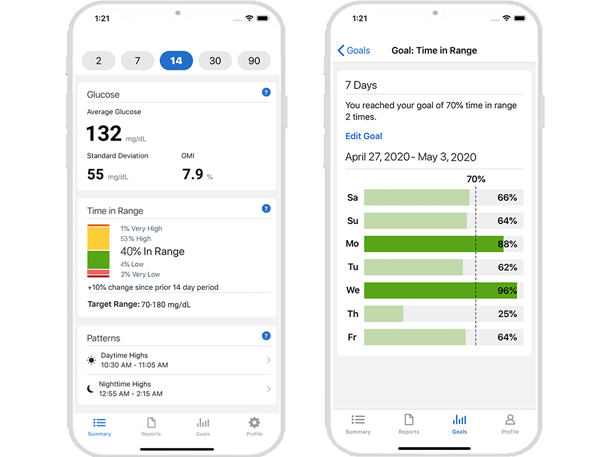 Data can be further analyzed using Dexcom Clarity, available for smartphones and computers. Using timeframes of 2, 7, 14, 30, or 90 days shows Average Glucose, Standard Deviation, GMI (an A1c estimate), Time in Range, and Patterns. It also generates several different report styles to help you and your healthcare team spot and change problem areas in your diabetes treatment regimen.

Health data tracking has become popular, and we’re accustomed to seeing graphs and charts of steps per day, hours of sleep, etc. So that makes the graphs and charts on Clarity seem like second nature. Time in Range has become a hot topic recently, and the Goal: Time in Range screen (above right) shows your results in a visual way that can sink in more quickly. I find this screen to be particularly motivating.

The Dexcom and Clarity apps have made an enormous change for the better in my life and in my A1c. Micro-carbing and micro-bolusing to stay within the preset lines of your goal range become like a 24/7 video game. Almost, dare I say, fun?

Are there any downsides to the G6?

Is there anything that could be improved about the G6? What do people complain about the most?

That’s a biggie. Even if you have insurance, you might still have high co-pays. So, ingenious users have figured out ways to extend the life of the sensors, with varying success. The steps involved in restarting a sensor are prying out the transmitter with a credit card or something thin and flexible like a guitar pick or used test strip, then waiting fifteen minutes, and putting it back into the sensor and starting as though it were a new sensor. Watch dreamflight6000’s YouTube video “How to Restart Dexcom G6 Sensor | 2020”:

Even though the non-rechargeable, disposable transmitter is supposed to be thrown out after 90 days, people have found a way to hack it to keep going until the battery actually dies. More information in Katie DiSimone’s YouTube video “Dexcom G5 and G6 transmitters reset.” Fair warning, this is much more technical than restarting the sensors!

You wouldn’t think this would be such a big concern among users, but it is. And that’s heartening considering the rapid environmental destruction of the earth. G6 applicators weigh 2.85 ounces, so over a year, an extra 6.5 lbs of plastic gets discarded. Dexcom’s website says the company is exploring options for a recycling program. The biggest hangup is that the applicator is a “blood-contacting component,” so recycling would be tricky. And the Dexcom G7 will totally resolve this issue. With all its benefits, don’t let that stop you from reusing them. One user’s handy husband attached several applicators to a wooden board to make a coat rack.

Problems getting a full 10 days out of the sensor, or repeatedly losing connection between transmitter and smartphone/receiver

Honestly, I’ve never had either of these happen to me, but I hear about it all the time in the Facebook groups I belong to. The only time I’ve lost connection is when I leave my phone too far away for more than five minutes. So I’ve been lucky.

Another complaint is the adhesive on the sensor getting “unstuck” towards the end of the ten days. There are all kinds of colorful patches you can order from Pump Peelz and other companies, but what you might not know is that you can order overpatches directly from Dexcom—for free.

I’m looking forward to the future. What advancements will another thirteen years of development from Dexcom produce? I don’t know, but thanks to my improved diabetes management, I should be around to witness it.