Duration of insulin action time (DIA, or active insulin time) is how long a bolus of insulin lowers your glucose. Like any other medication, you want to know whether insulin is still working before you take more. The DIA time starts when you give a bolus and ends only when the bolus is no longer lowering your glucose.

Insulin stacking occurs when you give another bolus before the last bolus finishes. In unpublished data from the APP study, 396 insulin pump wearers gave 64% of 132,000 bolus doses within 4.5 hours of a previous bolus. Thus, most boluses involve some residual bolus insulin on board (IOB or active insulin).1 After giving a bolus, an accurate DIA time minimizes insulin stacking, accurately tracks how much insulin activity remains, and lessens hypoglycemia.

DIA corresponds to how long insulin actually works in your body. DIA times are not arbitrary. They also differ little between individuals and between children and adults. An accurate DIA lets your Bolus Calculator (BC) accurately account for insulin stacking as IOB. With this, you and your BC can make reasonable judgments about bolus dose recommendations. As you bring glucose readings into your desired target range, give frequent boluses, and get physically active, your DIA time becomes more important.

Different insulin pumps estimate insulin action as a linear decline in bolus insulin activity, such as 20% or 25% each hour (Accu-Chek and Omnipod), or slightly more accurately as a curved line (Animas, Medtronic, and Tandem). Pumps provide the most accurate dose recommendations with DIAs of 4 to 6 hours.2-7 You want to select a DIA time within this range.

Why So Much DIA Confusion?

Much confusion exists about selecting an accurate DIA time. Much of the confusion arises from the insulin action time (IAT) of “3 to 5 hours” in insulin package inserts for today’s rapid insulins.8 IAT measures a different activity used to compare insulins with each other and does not accurately reflect how long a bolus of insulin will lower your glucose. The method used to measure IAT makes smaller insulin doses appear to have an artificially short action time than the 4 to 6 hours during which a bolus of insulin actually lowers the glucose (DIA).

The figure below shows IAT times for one of today’s fastest prandial insulins (Lyumjev; Eli Lilly, Indianapolis). The IAT for the 7U dose of Lyumjev measures 4.6 hours, even though this dose is less able to suppress insulin output from a healthy pancreas compared with the larger 15- and 30-unit doses. This time does not include 17 minutes between the insulin injection and when a glucose infusion starts and measurement of IAT begins. Based on the pharmacodynamics of SC injected insulin formulations, 5 hours appears to be a minimally appropriate duration for DIA. 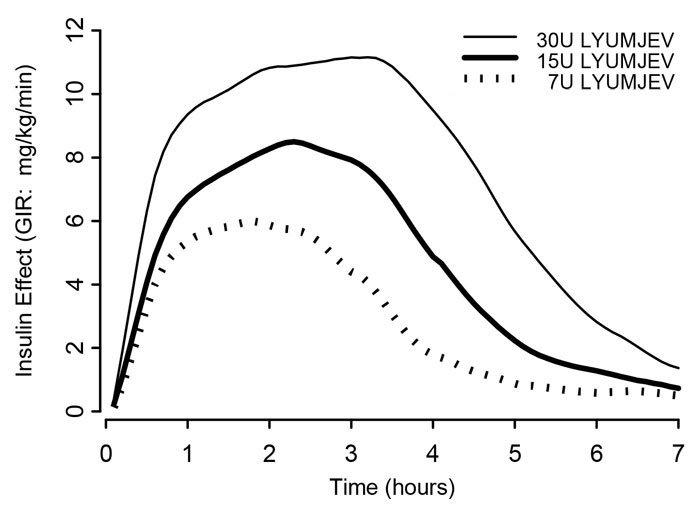 A person’s prior experience can make insulin seem to work faster than it actually does. For example, if your glucose goes low 30 minutes after a bolus, it seems logical to blame the bolus just given. However, the culprit is more likely residual insulin action from an earlier bolus. An excessive bolus can rapidly lower your glucose and make it seem that your insulin acts fast when you just gave too many units. Likewise, an excessive total daily insulin dose causes frequent lows and makes insulin appear to be fast.

Unfortunately, current insulin pumps and BCs allow DIA times in a range of 2 to 8 hours. This wide range encourages setting DIA times radically below appropriate values.9 Even the slightly faster insulins now under development will have DIA times of 4 hours or longer once DIA times are accurately measured. Three hours is a common DIA time setting in current insulin pumps. We found DIA times averaged 3.1 hours in downloaded data from over 1,000 U.S. insulin pumps in 2007. Data from Diasend found an average of 3.4 hours for over 1,000 U.S. and European pumps in 2014 (private communication). Short DIA times like these hide insulin stacking and lead to excessive BC bolus recommendations. Being physically active after a bolus can make insulin seem fast when it is the activity that is independently lowering the glucose.

A DIA of 3 hours hides much insulin stacking and the BC recommends larger boluses than needed. Again, this falsely reinforces the impression that insulin is fast and DIA times should be shortened. The unexplained hypoglycemia that results from short DIA times often leads to incorrect adjustments in other pump settings. If you correct a short DIA time in your pump, you’ll want to verify other BC settings that may have been incorrectly adjusted to accommodate the short DIA time.10

An inadequate total daily dose of insulin encourages many to shorten the DIA to get larger boluses. If your BC’s recommenced boluses cannot bring high glucose levels down to target in the presence of IOB, do not shorten the DIA. Never change the DIA time to “fix” a control problem. Instead, look at increasing the basal rates or carb boluses. Once these are appropriately adjusted, high readings become infrequent, and a 5-hour DIA time works fine.

Research studies show that DIA times are identical between children and adults. One study of 18 children, 6 to 18 years of age, concluded that: “Insulin pharmacodynamics of Novolog® in children and adolescents were similar to adults with Type 1 diabetes.”11 A study of insulin action time in 9 children between 6 and 12 years old found no difference from adults,12 while another study at Stanford University of 8 children found their DIA to be slightly longer than adults.13 A larger study looked at the activity of Apidra insulin in 20 children aged 7 to 16 and found no difference between children and adults.14

Read more about The Danger of Setting Duration of Insulin Action in Pumps.