Use Pattern Management at any time to improve glucose control. Keep in mind that this becomes most effective once your TDD is relatively appropriate, and you program more accurate basal rates, CarbF, and CorrF into your pump. Optimize your settings first! Check any new pump settings after you live with them for a week or so to see how they work. You then have CGM data from which to work.

Pump settings need adjustment from time to time as life changes. For example, your TDD and settings often need to provide a bit larger doses in winter and a bit smaller ones in summer. The only constant in life is change, so if you find your management is worsening over time, or you want to fine-tune your settings to the next level, pattern management can help you.

Nowadays, a CGM makes it easy to see patterns. If you don’t have a CGM, frequent testing with a meter and graphing your results also works well when combined with a graphical recording method like the Smart Charts.

Go Here if you are unfamiliar with an abbreviation or term.

You can use a CGM to improve readings in two ways:

Look at your graphs and data objectively. Emotions tend to cloud vision. If it helps, pretend they belong to a friend or family member. At times we’re like an old horse, taking the same route over and over, even though it’s become rocky and treacherous. Take off the blinders, get on the saddle, look with clear eyes, and help yourself live a better life.

Here’s an Example of a Good Avg Glucose and Low CV (Where You’d Like to Head): 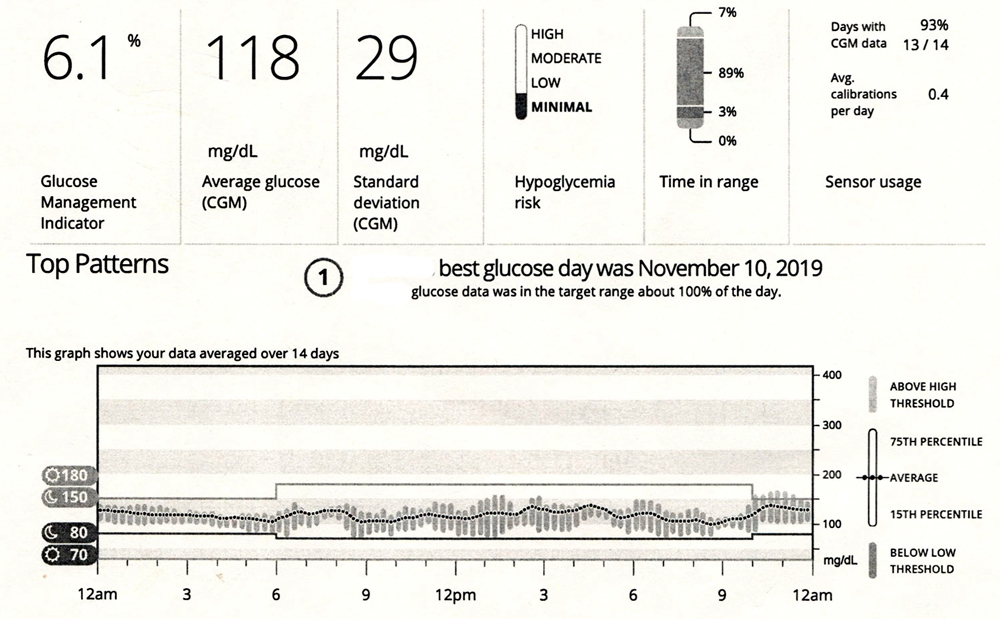 Compare It to These Unwanted Patterns You Will Be Looking For:

Now that you’ve seen all the patterns compared with one another, let’s take each one at a time and look at ways to resolve each one:

1. No Apparent Glucose Pattern (All Over the Charts) 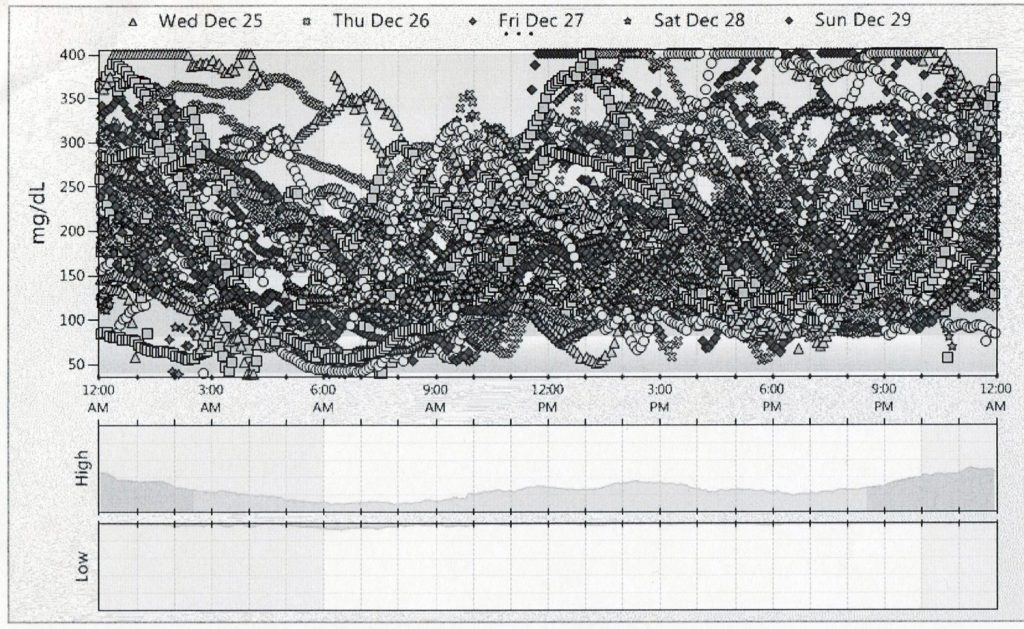 Erratic glucose readings that seem to have no rhyme or reason have 4 familiar causes:

2. Most Common Glucose Pattern (High Glucose at Night, Not Much Delight)

The most common glucose pattern below shows readings that are lower during the day, then rise after dinner and stay high into the early morning hours.

Always check for IOB before bed, and make sure to set your DIA to 4.5 hours or longer.

Low glucose readings carry some danger. Severe episodes can lead to unconsciousness, accidents, and even death. They often lead to rebound highs and a higher A1C after you release lots of stress hormones and empty your refrigerator. CGMs and AIDs considerably reduce but do not eliminate hypoglycemia.

Common Causes for Frequent Lows and What to Do

When your readings frequently go low, such as below 60 mg/dL four or more times a week, either:

4. Frequent Lows at a Certain Time of Day (Snorkeler)

This solution is straightforward.

To figure out which insulin to adjust, add up your carb and correction boluses taken in the last 5 hours (include any IOB at the start of the 5 hour period that is still working from an earlier bolus). Compare this to the basal units for the same 5 hours(multiply your hourly rate by 5). Adjust whichever is larger.

An excessive overnight basal rate, or long-acting insulin dose, is usually the cause. Lower your basal rate starting before midnight. Use a small reduction for occasional mild lows, a more substantial cut for frequent severe lows.

Middle of the night lows

If you have lows in the middle of the night:

If lows often happen after giving a correction bolus for highs:

The good news? At least you’re steady.
The bad news? You’re too high.

Again this is a straightforward fix. Increase your TDD. Usually, a simple increase in the basal rates or long-acting insulin will lower these readings significantly. For a conservative increase in the TDD, use the Pump Settings Tool then try the new basal rates and pump settings from the new TDD.

If your average glucose is over 183 mg/dL (10.1 mmol) or your A1c is over 8% with few lows, increase your TDD with the optimized TDD column on the right of the Pump Settings Tool, or increase the average TDD with the 5-1-6 Rule:

Increase the TDD using the Pump Settings Tool and then calculate new basal and bolus amounts from the new TDD.

For each 6mg/dL drop desired in average glucose, increase the TDD by 1%

Also, take a look at your basal/carb bolus balance. If one or the other is a good deal more than 50% of the TDD, raise the other one first to meet it.

For tips on avoiding going high after meals, see Post-Meal Spiking [link to: ].————-

8. Frequent Highs at a Certain Time of Day (Kite Surfer)

9. Before Breakfast Highs (High in the Morning, Take Warning)

Morning highs are critical to fixing. When they have been high for hours overnight, your A1c is higher, and you need larger correction bolus than usual to bring the glucose down. Once pre-breakfast readings are great, the rest of the day becomes far easier to manage. The graph below presents four different causes for highs before breakfast.

A. Already High at Bedtime

B. Night Basal Too Low or Dinner/Snack High in Fat or Protein

In teens and young adults, a circadian release of growth hormone can cause the liver to release extra glucose starting in the early morning hours. This makes the breakfast glucose high and requires a larger than normal correction bolus to counter the excess glucose release.

If your glucose often goes above 150 mg/dL (8.3 mmol/L) within 1 to 2 hours after a low reading, you likely ate too many carbs. Stress hormone release with sweating and shaking may cause the glucose to go higher in the hours that follow but would not cause the rapid rise seen in Fig. 13.8 from 36 to 283 mg/dL (2.0 to 15.7 mmol/L) only two hours later.

To eliminate lows to highs, simply stop over-treating lows with excess carbs. Use glucose tablets or fast-acting carbs at the very first sign of a low or as soon as an alert on your CGM sounds before excess stress hormones get released. Fast carbs take about 15 minutes to start to raise the glucose on a meter and about 20 minutes on a CGM, so don’t expect immediate results. Even in the panic of a low, it is harder to overdose on glucose tabs than it is on cookies, candy bars, or fruit juice. Avoid rebounds – get the Right Grams of Carb for Any Low Glucose.

Taking a bolus may seem strange when you are low, but if you consume too many carbs, a bolus is precisely what’s needed to prevent the high reading that will follow these excess carbs. Anytime a low glucose is over-treated, count the excess carbs, subtract any carbs needed to cover excess IOB, and give a carb bolus for the rest. The correct bolus will bring your glucose to your target 4 to 5 hours later without another low.

Don’t skip a bolus if you are low before a meal. Skipped boluses just make the next reading high and put you on a roller coaster. Instead, look back and fix what caused the low, check your CGM trend line, and consider a small reduction in the bolus dose.

Keep an eye on how many lows you are having. An excessive focus on high readings sometimes masks that many many high glucose readings originate from the overtreatment of lows. If readings go below 70 mg/dl (3.9 mmol/L) nearly every day, lower your TDD or a particular basal rate or CarbF to eliminate these frequent lows. You won’t see the forest (frequency of lows) until you stop looking at the trees (high readings that follow).

If your numbers are generally good—when fasting, overnight, and between meals—but tend to spike after meals, consider these reasons and solutions.

This shows as a high spike that comes back down to a reasonable level after 4 hours without a correction bolus.

This line shows the glucose rise after a meal then falling, but not back to where it started.

Many factors can cause this, so zero in on what’s not working to improve your management skills.

This one’s easy to spot. Your graph goes up and stays up.

Most adults and adolescents do best with about 55% (45-60%) of the TDD as basal insulin. The basal percentage is often lower than this in children prior to puberty and in lean older adults.

For frequent lows, lower your basal rates if your basal insulin makes up over 55-60% of avg. TDD, or raise your CarbF/ICR to get smaller boluses if carb boluses make up more than 45-50% of the TDD.

For frequent highs, raise your basal rates if your basal insulin makes up less than 45-50% of the average TDD, or lower your CarbF/ICR and ensure accurate carb counts if carb boluses make up less than 40-45% of TDD.

5 thoughts on “Use Pattern Management to Solve Specific Issues”