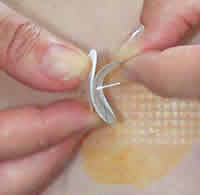 There are a wide variety of Infusion Sets available. Many have an adhesive surface that sticks to the skin. Shown to the right is a Rapid set which has a small 90-degree needle that’s easy to install. In this example, a paper covering is removed from the adhesive surface before placing it through the IV 3000 dressing on the skin.

Some pumps have a reservoir or cartridge in which insulin is loaded directly from an insulin bottle. Others have a bladder into which insulin is injected through a port, a chamber that is loaded with insulin and then placed into the pump, or space for standard 3 ml insulin pen cartridge to be placed into the pump. Refer to your pump manual for instructions on how to put insulin into your pump reservoir or bladder and how to prime the infusion line.

Even a small leak can cause a rapid loss of control. Replace the reservoir with another one if liquid, mist or bubbles are noted between the O-rings. 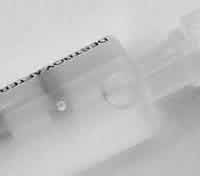 Look closely for any sign of an insulin leak between the O-rings. Replace the reservoir if any liquid, mist or bubbles are noted. Even seemingly small leaks in this location can cause a rapid loss of control.

Place the reservoir in the pump. Recheck the O-rings and then give 2 unit boluses until insulin can be seen exiting from the tip of the infusion set.

You are now ready to insert the infusion set.