Normally, about half of the day’s insulin is released as a relatively steady background or basal delivery. When carbs are eaten, a spike or bolus of insulin release occurs from the pancreas. In attempting to mimic the pancreas with a basal/bolus approach that better matches insulin to need, a convenient and precise way to deliver insulin can be very helpful. 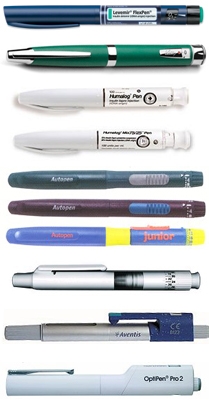 The best way for many to mimic the pancreas is with an insulin pen. Pens have been available for a quarter-century, but their use in the U.S. lags behind the wide popularity they have experienced in Europe. Insulin pens allow discrete injections on a just-in-time basis. There is no need to carry a syringe and a bottle of insulin and doses can be conveniently dialed up, making dose errors less likely.

An insulin pen looks like a fountain pen and is usually only slightly thicker in size. It has a disposable needle at one end with a cartridge that holds insulin and a dial that is used to select the insulin dose. Pen cartridges hold 150 or 300 units of insulin. Some pens are disposable and thrown away once the insulin is gone, while others are more environmentally-friendly with disposable glass cartridges that are replaced when they become empty.

Different pens can deliver insulin in half unit, one-unit, or two-unit increments. Half-unit pens, such as the NovoPen Junior, are particularly well suited for children and adults on low doses and come in bright graphic designs. Two unit pens, such as the AutoPen from Owen Mumford, are ideal for those with Type 2 diabetes or others who use large doses of insulin.

Prefilled cartridges are available for common insulins, such as Apidra, Humalog or Novolog, and Lantus or Levemir. Although we do not recommend them for most people, 70/30 mixtures that contain fixed ratios of 70% longer acting and 30% shorter-acting insulin are available for Novolog and Humalog. This works well for people who have difficulty determining correct doses and take doses twice a day, as well as for those not yet ready to take the fixed number of injections required for a basal/bolus approach. Most people who love the convenience of a pen will use one pen with a rapid insulin to cover carbs and lower high readings as needed several times a day. Then they use a second pen to take one or two doses of a flat long-acting basal insulin in separate injections.

To prepare the pen for use, always prime it first. Purge two to five units of insulin into a sink or the air to ensure that the pen is functioning, not clogged, and has insulin in it. Put a needle on before each injection and take the needle off after using it for an injection to avoid insulin loss or evaporation of insulin through the needle. When the pen is not in use, keep its cap on.

The needle on the pen is pushed into the skin and a button is pressed to give the selected dose. Pen needles are available in different lengths and sizes. The needle may be discarded after each use or at the end of the day.

After you inject, leave the needle under the skin while you count to eight. It takes longer for insulin to enter the skin from a pen than from injection by a needle. If insulin is dripping out of the needle when you take it out, you probably have not received your full dose. Leave it in longer next time.

The Companion Medical InPen is a reusable, Bluetooth-enabled, smart insulin dosing and tracking pen that is now available for people of all ages in the United States

NovoPen Junior is part of the first complete diabetes management system designed with kids and adults on low doses in mind. It allows you to dose in half increments if desired.

The SoloStar is an easy-to-use insulin pen made by Lantus. It comes pre-filled with Lantus insulin. You can set doses from 1 to 80 units one unit at a time.

HumaPen Memoir is the first insulin pen with a memory. HumaPen Memoir records the date, time, and amount of your last 16 doses (including priming doses) (No longer available in the US)

HumaPen Luxura HD is a reusable insulin pen that doses in half-unit increments from 0.5 to 30 units. HumaPen LUXURA HD is for use only with Humalog® 3 mL insulin cartridges.