Talking blood glucose meters provide a major benefit for those who are visually impaired or blind. The Prodigy® Autocode is the newest all-in-one talking meter available. It combines a meter and voice output module in one device. The previous most advanced talking meter, Accu-Chek® Voicemate, has been discontinued. Two other meters use voice modules that are purchased separately: the One Touch® SureStep®, the One Touch® Basic®, and the One Touch® Profile®(no longer available). 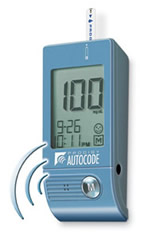 The Prodigy® Autocode meter is relatively small for talking meters at 4.75" in height, 1.75" in width and 1" deep. It works well for the visually impaired or the extremely busy person with diabetes. The audible prompts, provided in a clear crisp voice, guide you through each step of the glucose testing process, including the report of your results after a short 6 seconds. You can even choose between English or Spanish audio.

Prodigy® AutoCode calibrates itself to Prodigy® test strips automatically and draws the right amount of blood. It only requires 0.6 microliters of blood that can be taken from the fingers, palms, forearms, upper-arms, thighs and calves.

The meter itself can store up to 450 tests with date and time. It can give 7, 14, 21, 28, 60, and 90 day averages. The free software from Prodigy® allows you to download your test results to your computer so you can track changes in your blood glucose level over time.

The Prodigy AutoCode has many of the same features as the VoiceMate at a very small fraction of the cost. We've found the AutoCode online for $17.00 and up. 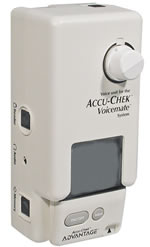 The Accu-Chek Voicemate, now discontinued, is composed of the Accu-Chek® Advantage blood glucose meter, which is plugged into the Voicemate's speech output module. The one-piece unit is 6.5" in height, 3.0" in width and 2.5" in depth, so it won't fit into a pocket or small purse but is still portable. There is a slot for a snap in code key for calibrating the meter for your test strips and an earphone jack. The buttons on the meter are also raised for easy recognition and locating.

The voice prompt guides you through the entire testing process. The strips have a notch cutout to identify where to apply the blood. They also allow you to apply more blood after the test starts. The Voicemate requires 4 microliters of blood and the response time can be as long as 40 seconds. The meter can store up to 100 test in its memory. Memory download requires the purchase of special Accu-Chek software and a cable.

The Voicemate says the meter's blood glucose reading aloud only once. It has a repeat button, and a thumb wheel control for on/off and setting the volume. The Voicemate can be operated by an external power supply or a nine-volt battery and is not rechargeable.

It is still available from select retailers and supported by Accu-Chek until stock runs out and is being improved for a future release. It can be found online for upwards of $250.

Since the Voicemate has been discontinued, there isn't much of a choice to be made. The ease of use for the visually impaired is the main focus of both of these meters and both accomplish this task. Considering the differences in price and the advancement of the common features, plus the smaller blood sample and faster response time, the new kid on the block, the Prodigy® Autocode, seems to be the easiest and most reliable of the two.

The SensoCard Plus, made by 77 Elektronica of Budapest, Hungary, is said to be much smaller than any other talking meter available. Unfortunately, it is not available in the US at this time. Features, along with its synthesized voice, include a large screen display, and test strip coding by means of a "code card" rather than visual cues. The strip uses capillary action, and requires a 0.5 microliter sample. One large, easy-to-find button controls the unit. The meter’s memory holds 400 tests, along with time and date, and it provides 7-, 14-, and 28-day averages. Results are downloadable to your PC. Instructions come in 18-point large print and audiocassette, and a prototype strip guide, to make sampling easier, is being developed. Although a blind person with neuropathy in the hands might find the meter’s “code card” system a bit difficult, the SensoCard can be “keyed” manually as well. Potential cost in America or when it will be available is unknown but most believe it will be cheaper than currently available talking meters.

Also see the Voice of the Diabetic Resolution 2007 Regarding Access to Blood Glucose Meters.