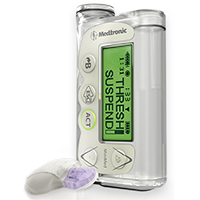 The FDA approved the Medtronic MiniMed 530G insulin pump with its display of the Enlite continuous glucose monitor in September, 2013. The 530G is the first system in the United States that can automatically stop insulin delivery if the CGM’s glucose value falls to a preset level (60-90 mg/dl) AND the wearer doesn’t respond to the Threshold Suspend Alarm. This functionality puts the device in the newly created OZO: Artificial Pancreas Device Classification created by the U.S. Food and Drug Administration. 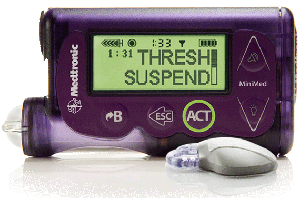 The FDA approved the Medtronic MiniMed 530G insulin pump with its display of the Enlite continuous glucose monitor in September, 2013. The 530G is the first system in the United States that can automatically stop insulin delivery if the CGM's glucose value falls to a preset level (60-90 mg/dl) AND the wearer doesn't respond to the Threshold Suspend Alarm. This functionality puts the device in the newly created OZO: Artificial Pancreas Device Classification created by the U.S. Food and Drug Administration. Although the 530G is an early step toward an artificial pancreas, some consumers have criticized Medtronic's marketing of the 530G using this classification, as discussed below.

The 530G will be sold as an integrated system, paired with their CGM and its Enlite sensor. Those who want to use the Medtronic pump with a different CGM like the Dexcom G4 or Navigator would order the Revel 523 or 723 pumps that are identical to the 530G other than its display of the Enlite CGM. These pumps do not have threshold suspend. The Enlite sensor is said to be more comfortable, have slightly better accuracy than the older Guardian sensor, and can be worn up to 6 days rather than 3. Medtronic suggests that the sensor be worn on the abdomen only. It comes with a new Enlite Serter that puts the sensor in at a 90-degree angle while hiding the needle from the wearer. Like the Revel 523 and 723 pumps, the 530G uses the same 180-unit and 300-unit reservoirs and infusion sets.

Threshold Suspend (TS) is the suspension of basal insulin delivery when a selected low blood glucose threshold is reached. The goal is to minimize time spent in hypoglycemia. The low threshold can be set between 60 and 90 mg/dL. An alarm is sounded when the TS begins to alert the wearer. The low alarm repeats every 20 minutes for sound sleepers. If the wearer doesn’t clear the alarm, the pump basal delivery is suspended for two hours and then resumed. If the blood glucose falls below the threshold during the four hours after basal is resumed, TS will occur again for two hours. When the wearer clears the alarm, they can choose to stay in suspend or to resume basal.

To avoid an overload of false positive alarms (and basal suspension), Medtronic suggests setting the TS at 60 mg/dL and the low glucose limit at 70 mg/dL so it will go off before the suspend occurs. For someone with hypoglycemia unawareness or frequent lows, we recommend starting with higher values like 80 to 90 mg/dL and also activating the predictive alert to compensate for the imprecision of the Enlite CGM system. Medtronic also suggests that the high alarm, the high predict alarm and the rising rate of change alarm be set to OFF initially to avoid confusion of alarms. This is a good option if you frequently look at your glucose in your pump screen or are not concerned about high readings.

The 530G can be calibrated wirelessly from a Bayer Contour Next Link Meter. The first calibration is done two hours after insertion and then again six hours later. Calibration every 12 hours thereafter is required but accuracy can be improved by calibrating more often. Calibration before sleep is recommended to improve safety and accuracy of the 530G at night with fewer annoying alarms. Medtronic advises against calibration when two down or up arrows are shown on the pump screen.

The retail cost is $7,350 for the pump/CGM system. Sensors are NOT included in this price. Medtronic expects most users with insurance will pay between $500 and $1,200 out of pocket for the new pump.

Medicare coverage does not pay for sensors for the CGM and nor does Medicaid in many states. These coverages, however, can be used for the pump by itself.

Medtronic promoted their New Technology Guarantee Program early in 2013 so that customers who bought the Paradigm Revel wouldn’t be left out when it was time to upgrade. Now that the 530G is approved, those in the program will be upgraded at no cost to the new device. Unfortunately, FDA approval does not extend to those under the age of 16 so they cannot upgrade at this time.

Also, for those who would just would like to switch from the Dexcom Continuous Glucose Monitor, you can join the Better Together Program. The program gives Dexcom customers a chance to save $800 when they buy a new 530G system. By trading in your Dexcom G4 with sensors, you can save $500 of the new pump-CGM system. You can save an additional $300 if you submit photos, video. or a written testimonial detaling why you chose the Medtronic system.

Is the 530G appropriately called an Artificial Pancreas?

Medtronic uses the Artificial Pancreas classification for the 530G pump/CGM system, but many bloggers and writers have pointed out that this is misleading. According to medterms.com, Artificial Pancreas means: "A machine that constantly measures glucose (sugar) in the blood and, in response to an elevated level of glucose, releases an appropriate amount of insulin. In this respect, an artificial pancreas functions like a natural pancreas."

Although the introduction of the Threshold Suspend is a step in the right direction, many feel calling it an artificial pancreas goes too far. Medtronic has defended its use of the term on its blog, saying that they are using the term because of the FDA's classification categories.

The 530G is ideal for those who want to use the 6 day Enlite sensor, especially anyone who has frequent lows, who does not respond to the alert while asleep because of poor hearing or other reasons.