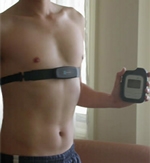 The HypoMon® system includes a battery powered sensor worn on your chest and a monitor. The Hypomon doesn't measure actual blood glucose levels. Instead, the sensor recognizes and measures the bodies physiological responses to changes in BG levels, specifically those related to lows. When certain physiological responses are seen, the sensor wirelessly transmits an alarm to the monitor up to 10 feet away, similar to the mySentry Remote Glucose Monitor from Medtronic. One thing to consider is that hypo unawareness can vary between people so you may not get the expected alarms if your responses are out of their tested range. You should speak with your health professional about your hypo unawareness before using a device like the Hypomon.

Prior to bed, the user is required to take a standard blood glucose test and enter it into the monitor. The HypoMon should not be used if you have measured a blood glucose test < 45 mg/dl (2.5mmol/L) within 12 hours or < 72 mg/dl (4.0mmol/L) immediately before intended use. If an alarm sounds during the night, the user must check their blood glucose levels and enter the new reading into the monitor. This alarm allows for the patient and/or care person to treat the hypoglycemia at an earlier stage.

Some drawbacks from the Sleep Sentry may be present in this device as well. For instance, movement or sweat often triggered false alarms in the Sleep Sentry. A particularly hot night or constant tossing and turning can result in many alarms throughout the night. AIMEDICS says that false alarms for hypos that are not occurring happen in only about 4 out of 20 nights.

AiMedics, established in October 2001 as a commercial spin-off of the University of Technology, Sydney (UTS), specializes in non-invasive monitoring for various diseases, including diabetes, epilepsy, fatigue and Sudden Infant Death Syndrome. It has been funded through a series of investments and government grants; BIF, NSW Government, Juvenile Diabetes Research Foundation (through UTS) and the Australian Government.