A few years ago, when real-time continuous glucose monitors (CGMs) were introduced, my opinion was less than enthusiastic. I kept going back to the issue of accuracy. If blood glucose meters are within 15% of lab values, and CGMs are within about 15% of the meters, how useful could they possibly be? In my personal experience, I have seen plenty of CGM inaccuracies. And a day does not go by without a call or e-mail from a concerned client doubting the usefulness of their CGM system.

With “consumer confidence” in CGM still lacking, one must ask: how much value do these systems really have?

For those of us looking for ways to improve our blood glucose control and make living with diabetes just a bit easier, CGMs do a lot more than just display numbers.

Few of us can tell when our blood sugars are just slightly high or slightly low. When I look at the current BG number on my CGM, I interpret it as simply low, high, or somewhere in the middle. If it seems a bit low or high, I’ll confirm with a fingerstick and act immediately with an appropriate bolus or snack. Having an insulin pump that calculates insulin-on-board (active insulin) really helps in this regard.

Perhaps the most valuable aspect of CGM systems is their ability to alert the user when blood sugar levels may be approaching high or low levels. To me, they act sort of like “highway rumble strips” that keep us from veering off the road and into a ditch.

Although they may not detect every high and low, CGMs will provide an early warning for the vast majority – and much earlier than most of us would detect them on our own. Some systems even have predictive alerts: they let you know if your blood sugar is expected to cross your high or low threshold soon based on the current level and rate of change. The low alerts make it considerably safer to work, drive, exercise, and aim for tighter glycemic control. Likewise, the high alerts allow us to be more aggressive at managing after-meal blood sugar spikes, preventing ketoacidosis, and tightening the A1c since we can reduce the amount of time spent in a high range.

Another valuable bit of information to go along with the immediate blood glucose value is the direction it is headed. If you checked your blood glucose at bedtime and found it to be 95 mg/dl (5.3 mmol), you would certainly react differently if you knew it was on the rise rather than if it was dropping. Similarly, a 188 (10.5 mmol) prior to exercise would mean more to you if you knew whether it was rising, falling, or steady.

All CGM systems display up and down arrows to denote both the direction and magnitude of blood sugar changes over the past 15-20 minutes. USE THIS INFORMATION TO YOUR ADVANTAGE! The ability to forecast where your blood sugar will be over the next hour or so can keep you from straying too far out of your desired blood sugar range.

Another way to use the trend information is to adjust your meal and correction boluses based on where the blood sugar is headed. Rising gradually or sharply? Add 10% or 20% to your bolus. Dropping gradually or sharply? Deduct 10% or 20%. Remember, boluses are designed to get your blood sugar into a normal range in the next 3-4 hours. If there is a current upward or downward trend, the amount of the bolus will need to be adjusted accordingly.

The various CGM systems display trend graphs that show what has happened over the previous 3 to 24 hours. Although looking back at the past several hours of data will not help you to fix a current problem, it can provide you with information for preventing a recurrence.

For example, checking the 3 or 4-hour trend graph a couple of hours after meals can reveal the postprandial effect of various types of foods. Did your blood glucose level spike very high soon after the meal? If so, perhaps you need to give your bolus earlier. Did your blood glucose drop soon after the meal and then rise a few hours later? Perhaps you need to delay your bolus or extend the delivery. 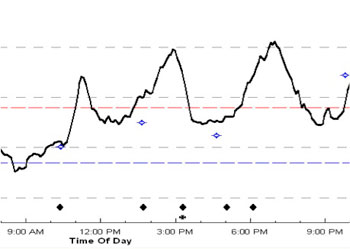 The 3-to-6-hour trend graphs can also reveal blood glucose patterns related to stress or exercise. Checking the graph during and after stressful events and physical activity will show when and how much your blood sugar rose or fell. The next time a similar situation arises, insulin and snack adjustments can be made based on what you learned previously.

The 6 to 12-hour trend graphs can play a key role in the regulation of basal insulin, particularly overnight. By looking at the CGM’s trend graphs starting approximately 4 hours after the last bolus was given, you can evaluate the effectiveness of your basal insulin. If the blood sugar level is rising or falling after the food and mealtime insulin has worn off, the basal insulin probably needs adjustment.

In the example below (taken from an insulin pump user), with a meal eaten (and bolus given) at 11:30 am, the blood sugar level begins to take a downturn at around 4 pm. This indicates that the basal insulin level is too high in the mid-to-late afternoon. 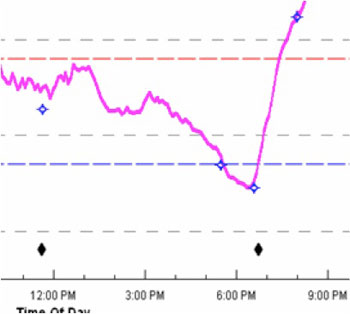 In the next example, taken from a person using glargine as their basal insulin, the blood sugar level is rising through the night from 2 am until 8 am. This indicates the need for a higher dose of glargine or the addition of some NPH insulin at night.

In addition to helping fine-tune basal insulin doses, long-term trend graphs can be used to determine the action curve of your rapid-acting insulin. That is, how long it takes for your insulin to finish working (this is valuable in determining “insulin-on-board” or “active/unused insulin”). Action curves can vary from person to person, with times typically ranging from 2½ to 5 hours. To determine your action curve, simply check to see how long it takes for your blood sugar to stop dropping after giving insulin for a meal or to correct a high blood sugar level. Once the line graph “flattens out”, the insulin has pretty much run its course.

In the example below, the insulin action curve is approximately 3 hours. The bolus given for a meal at 5:30 seems to finish working by around 8:30. 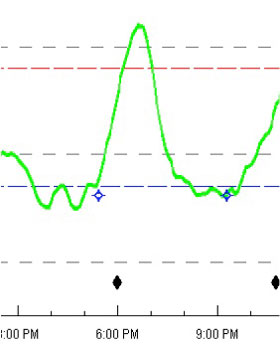 Long-term trend graphs are also useful for seeing the delayed effects of high-fat foods and intense/prolonged exercise, as well as blood sugar patterns during illness. The downloading programs that can be used with CGM systems (Medtronic’s Carelink website; Dexcom DM3 software, and Abbott’s Copilot program) can be used to examine long-term trend graphs over multiple days. Checking the data during and after holidays, illnesses, menses, medication changes, and periods of very high physical activity can reveal patterns of higher- or lower-than-usual blood sugar levels.

Whether you use your CGM data for dosing purposes or verify the data with fingerstick readings, the simple act of looking at and using your monitor has its rewards. Research has shown that checking the monitor at least 12 times per day (hourly during waking hours) and wearing the system most of the time (rather than intermittently) tends to produce significant improvements in HbA1c and reductions in hypoglycemia.

With so much to learn and so many ways to benefit from CGMs, it makes sense for more people to use them. As is the case with insulin pumps, success with a CGM usually hinges on having appropriate training and guidance. My practice (Integrated Diabetes Services) offers a 1-time CGM data analysis service via phone and the internet for those who want to learn more about analyzing/interpreting their own CGM data.

We also offer loaner CGM systems nationwide for those interested in giving one a try for a week or two.

Our web site also contains a detailed comparison of the various CGM systems for those who are considering which one to purchase.

Editor’s note: Gary Scheiner MS, CDE is Owner and Clinical Director of Integrated Diabetes Services, a private consulting practice located near Philadelphia for people with diabetes who utilize intensive insulin therapy. He is the author of several books, including Think Like A Pancreas: A Practical Guide to Managing Diabetes With Insulin and The Ultimate Guide to Accurate Carb Counting. He and his team of Certified Diabetes Educators work with people throughout the world, providing advanced self-management training and blood sugar fine-tuning via phone and the internet. Gary has had Type-1 diabetes for 25 years and has worn & trained on every make & model of continuous glucose monitor. He can be reached at gary@integrateddiabetes.com, or toll-free at 877-735-3648.